The practice of record keeping appears in Perast in the 15th century and continues until the end of the World War II. Thanks to the preserved material, Perast Museum Archives possesses three fonds: Fonds of Perast Municipality (PA), Visković Family Archives (PAV) and Fonds of Perast Elementary School (PAŠ).

The documents in the fonds of Perast Municipality (PA) date back to 1441 and continuously follow the historical, political and cultural development of the Town of Perast which played an important role in the administrations of various states that Boka and Perast were for centuries being subjected to.

The Municipal Register or Green Book (Libro Verde) is of great value since it contains documentary evidence on the development of Perast and its positioning as an autonomous administrative unit. The decisions of the Minor and Grand Council passed on the occasion of the first sessions that were being held in Velja Street in Perast were recorded in the Green Book.

In the fonds, there are preserved documents on the organization of judiciary, secular, military, church authorities and overall societal organization in Perast. They testify to the relations between Perast Municipality and the neighbouring ones, especially those that were subjected to the Ottoman authority, and also to the affairs and relations between Perast and Kotor Venetian governors.

In the fonds, there also acts that testify to the participation of the inhabitants of Perast in wars (Cretan and Morean), battles (Lepanto, siege of Kotor, liberation of Risan and Herceg Novi from Ottoman authority), as well as various minor or bigger clashes. Archival acts in the fonds of Perast Municipality contain the data on the erection of various edifices in Perast, Perast fortress in particular, as well as church structures, bell-towers and other significant profane structures.

The archival material from this fonds gives a realistic picture of the situation on the border between two worlds – Christian and Islamic, during several centuries. The documents of the fonds follow continuously the changes of rulers in the territory of Perast. They give us a possibility to perceive a broader context of historical events in the area of Perast, Boka Kotorska Bay and even wider, during several centuries.

The acts in this archival fonds were written in Italian, Serbo-Croatian, Old-Slavic, Turkish, Russian, German, French, Latin, Greek, Romanian and Hungarian. This great range of different languages is yet another value of this Archive.

Visković family fonds (PAV) contains the material spanning from 1447 to 1927. The members of Visković family used to occupy very important positions in the countries which were present in this area, thus their acts are related to private and official communication with the authorities of these countries.

This archival fonds possesses ducal acts, certificates and other acts issued to commend the members of Visković for their faithful service rendered to the Venetian Republic, as well as other families’ ducal acts, namely those issued to the Burovićs, Balovićs, Mazarovićs, Zmajevićs, Smekjas and Martinovićs.

This family archival fonds possesses also handwritten books of the members of prominent Perast families, amongst which there is a manuscript written by Drago Martinović, son of the famous sea captain Marko Martinović, whose fame reached as far as faraway Russia and its emperor Peter the Great.

The archival fonds of Perast Elementary School (PAŠ) was created in 1871 and it comprises the documentation related to curriculum, teaching plan, teachers’ daily work, school absence, pupils’ assessments, as well as various letters and announcements received during the operation of the School.

It is important to emphasize the scientific importance of this fonds for the understanding of the succession of political authorities and their ideologies that made impact on the system of education of that time.
The acts were mostly written in Serbo-Croatian, while those earlier ones were written in Italian.

The research of rich archival material in the possession of Perast Museum is essentially important for the concept of national cultural heritage and its preservation in local and global community. 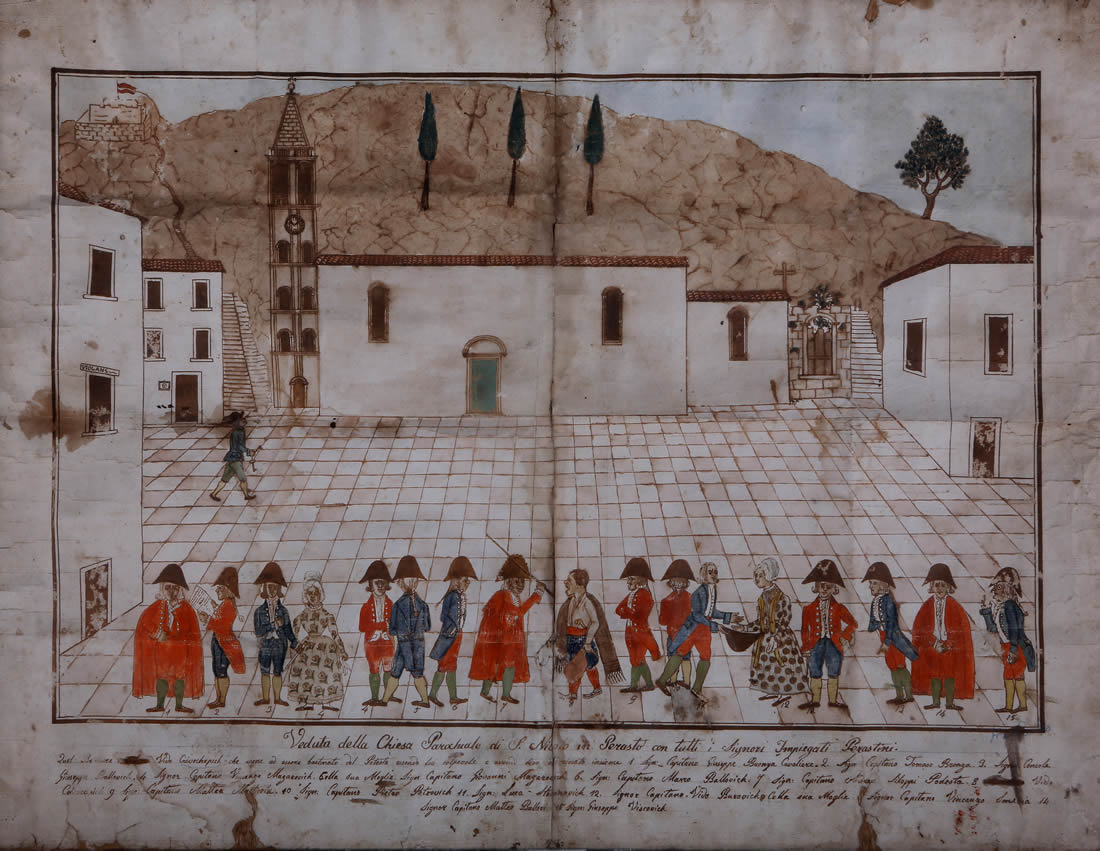