On their voyages, the seafarers of Perast were always endeavouring to enrich themselves as personalities, but also their native Perast. This endeavour has remained very visible until present-day in architectural solutions of the Town, in its grandiose sacral and profane edifices, as well as in its artistic treasure. The witnesses of this love and endeavour can also be seen in the objects of the Historical-Art Collection.

Bujović Palace, which houses Perast Museum, is a jewel of the 17th century profane architecture in Perast and quite certainly a masterpiece of the Venetian architect Giovanni Battista Fonte.

Legend has it that Bujović family Palace was built using the remains of the demolished walls of Herceg Novi after the battle for the liberation of Herceg Novi from the Ottomans in 1687. Vicko Bujović, a nobleman, the owner of this gorgeous palace, took part in this battle with his company. To honour this endeavour of theirs, one gate in the historic core of Herceg Novi is called Perast Gate. 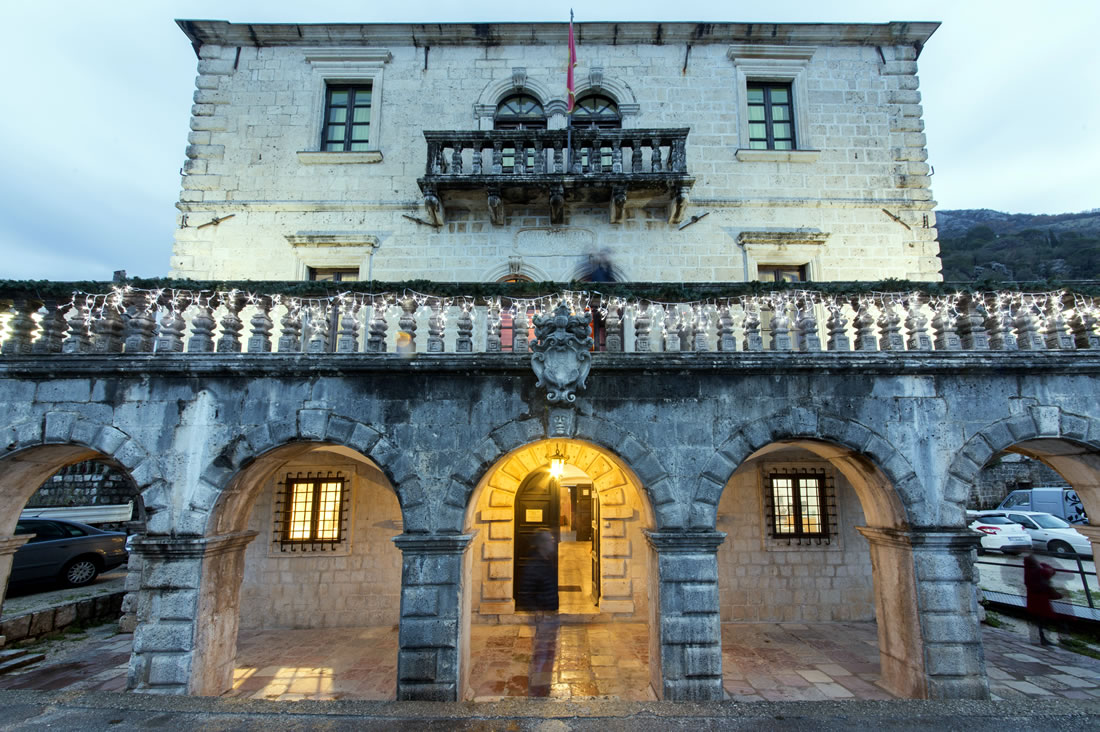 The Palace, which is of plain lines, has ground floor and two upper floors and a hipped roof. Annexed to the ground floor, facing the sea, there is a monumental porch with five arcades, above which there is a terrace with stone balustrade. There are five balconies on the Palace. The Palace is essentially of Renaissance style, with elements of Baroque, which is seen in richly elaborated stone ornaments on the arcades and balusters. The splendour of the facades becomes even more impressive in the groups with double stone portals on all balconies.

There are also three very impressive inscriptions on the Palace, which testify to its owner and its purpose. In the middle of the balustrade of the big terrace, on the outside there is a coat of arms of Stojšić brotherhood (two lions holding a chair) which Bujović family belonged to.

Perast Baroque painting is a real treasure in the Historical-Art Collection of Perast Museum.

The Collection contains the portraits of Perast captains from wealthy families. The captains were both, mariners and merchants but, due to the nature of their profession and the times they lived in, they were also warriors. Some of them were even portrayed in armours, which points out to their principal occupation, while others were portrayed in civilian clothing. The clothing followed Venetian fashion of the time, since the way of life in Perast at that time was modelled on the one in Venice.

In the representative salon on the first floor of Bujović Palace there are portraits of Perast captains from the 17th and the 18th century. The portraits were made in the spirit of the then actual Baroque style and their artistic value is invaluable.

Besides Baroque portraits, the holdings of the Historical-Art Collection of Perast Museum contain also the portraits of renowned Perast personalities, members of Perast families from the 19th and the beginning of the 20th century, which were being made in the spirit of Classicism. The authors are mostly unknown, but there are several portraits which were signed by Frantisek Ziegler, a Czech painter, who was active in Boka at the time, Ugo Brunetti, Aleksandar Diamantis and Ivan Volarić.

In Perast Museum, there are also numerous objects which belonged to Visković family, the family which bequeathed their unusual and very valuable palace to house a museum. The objects that had been put on display there were moved to Perast Museum building after the 1979 earthquake due to inadequate conditions for displaying the same. Visković family is one of the oldest noble families of Perast and its members were very much present throughout the glorious era of Perast, and even earlier.

The importance of the sub-collection of maps of Perast Museum becomes even greater with the presence of atlases and navigational charts from the period of the 17th, 18th and the 19th century. As early as in mid-17th century there were cartographers in this area who left true depictions of, not only the Adriatic coast, but of the entire Mediterranean. One of the most significant among them is Vicenzo Coronelli, a Venetian cartographer whose atlases from 1688 and 1690 constitute a real pearl of the Museum.

The 1688 Atlas shows the towns and fortifications along the entire coast of the Adriatic Sea, whilst in the 1690 Atlas there are the views of the coasts of European countries.

Besides the illustrations from these two atlases, it is necessary to mention the map of Boka Kotorska made by Antonio Zambela, a Perast 18th century cartographer. The map was made according to Coronelli’s maps and its value is the result of its accuracy and abundance of presented details.

Perast Museum stores several examples of the coats of arms of exceptional craftsmanship, which supplement the stories about famous families, noblemen and knights, as well as the story about Perast from its golden era.

As the Venetian Republic subjects and the participants of wars against its enemies, the inhabitants of Perast would often be decorated for their merits so that Perast Museum preserved several diplomas from the period of the 17th and the 18th century, which are related to military merits. Diplomas and medals awarded to the inhabitants of Perast at the end of the 18th and in the 19th century, mostly concern their merits from the area of diplomacy. The Museum possesses diplomas and medals in several languages.

The decorations which are part of the permanent display nowadays come from Austria, Bulgaria, Vatican, Turkey, Montenegro, Serbia, Prussia, France and Russia.

Perast Museum also possesses a rich collection of coins from all over the world. The oldest example is a 1780 Maria Theresa thaler, with the most recent ones from 1970-ies.

The paintings with marine features possessed by Perast Museum are valuable witnesses of the past not only of their artistic, but also of documentary value they transmit. 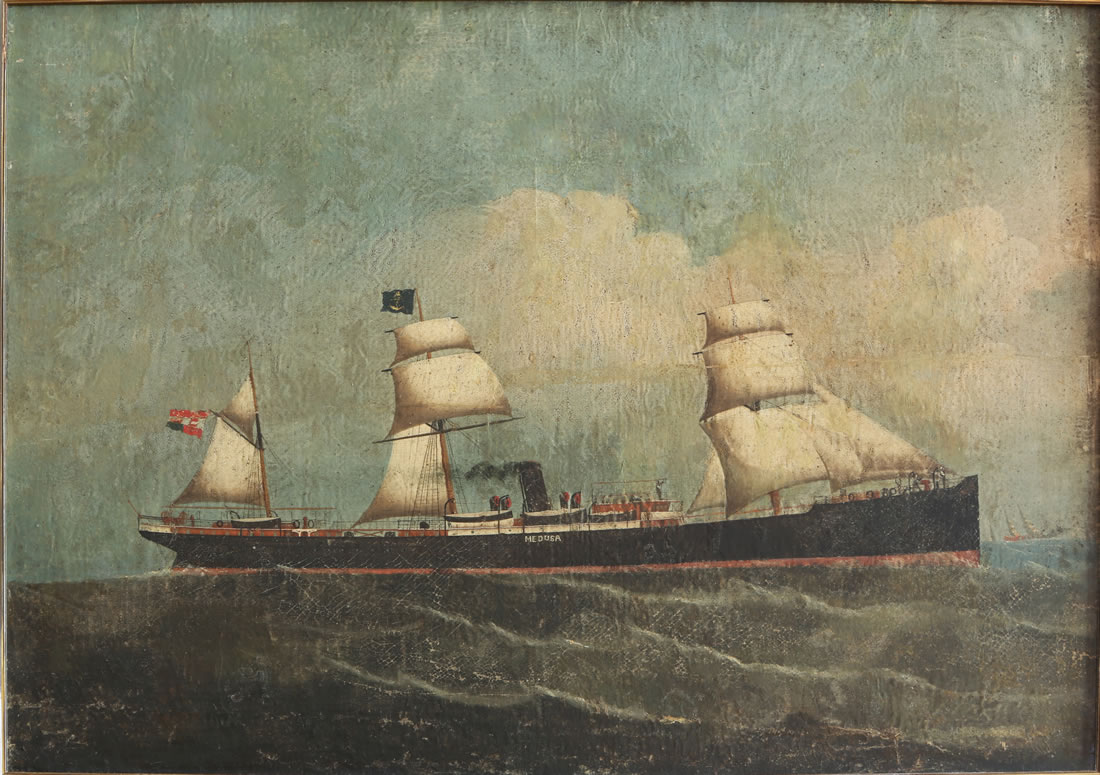