Perast position naturally conditioned what its inhabitants would be engaged in, thus in the 13th century there are references to shipbuilders, coopers, lime producers, brick makers and stonemasons.

The oldest preserved archival document on shipbuilding dates back to the year 1336. A copy of this document can be seen on the ground floor of the Palace which houses the Maritime Collection. This document prohibits the inhabitants of Perast to build ships of “scabba” or gondola type. They were allowed to build smaller sailing vessels of “londra” type.

The sailing ships built by the inhabitants of Perast who also sailed on board these are a reflection of their shipbuilding skills. Different models of sailing vessels were being built at several shipyards in the Town. Navigation aids and solid equipment on board ships enabled them to reach distant places, to participate in numerous naval battles. 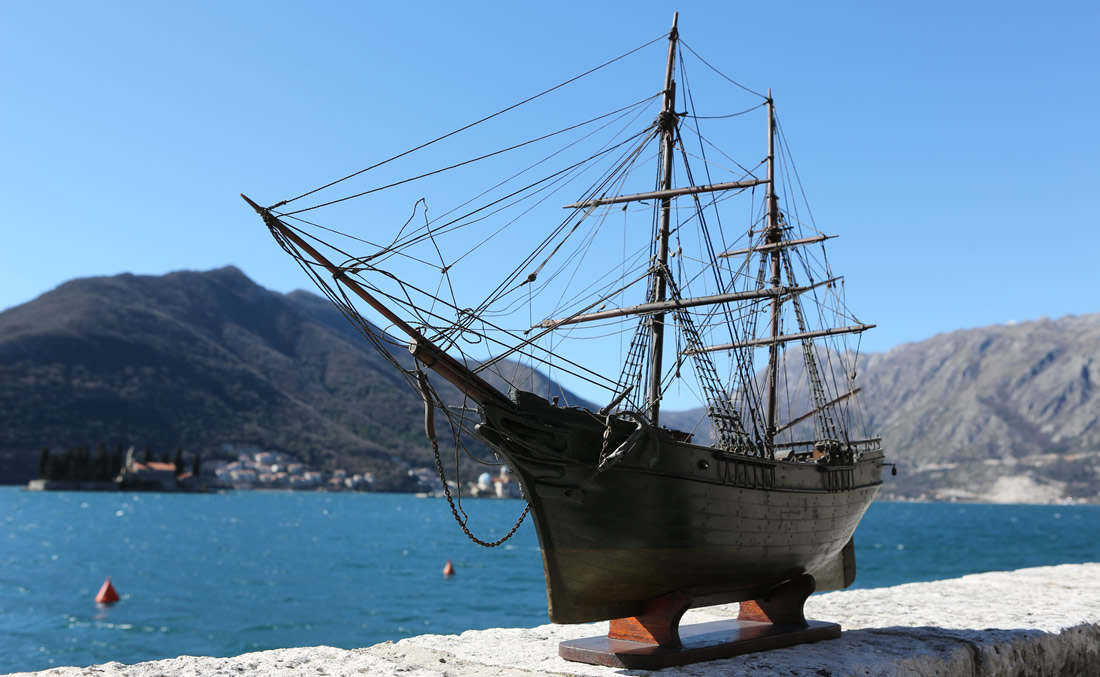 In the 17th century Perast seamen were in command of 23 Venetian “navas” and 2 corvettes. The liberation of Herceg Novi from the Ottomans (at the end of the 17th century) sees the beginning of glorious era of Boka seafaring (shipping). As it is natural, Perast was not only building but also losing ships – thus in the period from the 17th to the mid-18th century they lost 100 ships.

In addition to defending the territory of the Venetian Republic they were subjected to, Perast enjoyed the honour of being “gonfalonieri”, guardians of the Venetian battle standard on board the flagship. By reason of their skills and loyalty, they be awarded extensive privileges by the Venetian Senate, thus in the 17th and the 18th century Perast was known as seafarers’ nest, naval centre and maritime trade centre. This period is known as the golden era of Perast. The period of full swing of maritime trade contributed to the economic and cultural rise of Perast.

The members of the families Visković, Balović, Martinović, Bujović, Zmajević, Bronza, Brajković, Mazarović, Širović and Smekja deserve all the credit for the glory and importance of their town in the past centuries, thus deserving special place in the Museum display.

They were renowned as accomplished seafarers, connoisseurs of theoretical and practical part of the navigation skill. They received the greatest acclaim in 1698 when Marko Martinović taught navigation skills to Russian boyars – which date has ever since been considered the beginning of maritime education in this region (until then there had been occasional private forms of maritime instruction which gave us big pedagogues and much respected seafarers).

The 19th century storm compass, constructed by Frano Visković, is integral part of the permanent display. Special casing contains a magnetic compass provided with cardan suspension system so as to prevent the impact of ship rolling on the behaviour of the magnetic needle. Together with storm compass, Captain Frano Visković patented two more navigation aids: cyclonograph – an apparatus for graphic presentation of cyclones, and dromoscopium – an apparatus for the conversion of true course to the compass one and vice versa.

Amongst cannons there are two signal ship cannons of “taras” type from the 15th century and two 17th century ship cannons from the ship “San Giorgio”. In 1676, Venice presented Perast with a falconet cannon, which was used for training. Visitors have the opportunity to see it as a part of the permanent display.

Perast Museum Maritime Collection contains two anchors, too (end of the 19th –beginning of the 20th century). One of them is the Admiralty Pattern, which was taken out of the sea off Perast. It consists of shank, crown, arms, flukes, palm, stock with balls and anchor shackle, weighing about 1 000 kg.

Navigational charts were of great help to seafarers and marine merchants for easier orientation at sea. There are 18th century charts of the Mediterranean Sea, of the Adriatic coast, of the coasts of France, Portugal and Spain, chart of the Atlantic Ocean and of the English Channel.

The fall of the Venetian Republic in 1797 and the era of steamships (19th and 20th century) changed forever the image of Perast and its life. With the arrival of Napoleon’s troops at the end of the 18th century, commercial activity and maritime affairs suffered dramatic decline.

Perast Museum legacy has remained to testify to the Perast of seafarers, its history, tradition, customs and lifestyle for many years to come. Every object is a living document and a source by means of which we can read the pages of our glorious past.