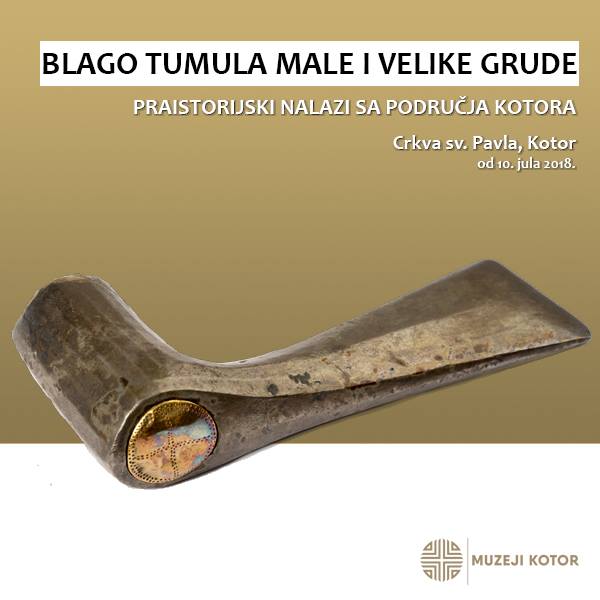 Treasure of “Mala Gruda” and “Velika Gruda” tumuli is the title of the permanent display of prehistoric findings from Kotor region prepared by the Municipal Public Institution “Muzeji Kotor”. Valuable exhibits, some of which dating back to the 3rd millennium B.C., will be put on display in St. Paul’s Church in Kotor Old Town on 10th July 2018.

Among a large number of stone tumuli (mounds) scattered on the hills of Boka Kotorska Bay, two have always been attracting special attention – Mala Gruda and Velika Gruda which are located in the vicinity of Radanovići.

In the central grave of this tumulus, a fragmented shallow conical bowl and a one-handle chalice were found. Mala Gruda pottery demonstrate all the features of “Vučedol” inlaid pottery with specific engraved ornaments.

As regards metal findings, by the beauty of craftsmanship and the material used, the following ones stand out: golden ritual knife, silver ritual axe with golden application and five golden ringlets or pendants which, on the basis of analogies, can be dated to Cretan-Mycenean culture.

The tumulus has its largest diameter of 26 m, and its summit rises 6.30 m above the surrounding terrain. Velika Gruda is in fact a dual tumulus consisting of a clay mound with the height of 4.50m on top of which another mound was created, having the height of 1.80 m in its centre and built of pebbles from the nearby stream.

Archaeological research of Velika Gruda tumulus were being carried out during three consecutive years, i.e. 1988, 1989 and 1990. As early as during the first year, the research discovered that the stone calotte above the clay mound was in actual fact a subsequent necropolis for multi-tiered burials. Disturbed graves and scattered remains at the very summit of the calotte could have belonged to Early Iron Age, while the graves in the deeper layer of the stone calotte belonged to the final stage of the Bronze Age.

At the very bottom of the clay mound, central two-tier grave made of stone slabs was discovered, having no covers. The upper grave contained just few bronze objects, while in the lower grave a skeleton was found in a crumpled position lying on its left flank. Behind the skeleton there was a ritual ceramic cup with engraved and white coloured inlaid decorations of “vučedol” type. In front of the defunct person’s face there were two bronze blades and a narrow bronze axe, while underneath the back of the skull there were eight ringlets in total made of native gold, three of which belonging to “Mala Gruda” type, i.e. Cretan-Mycenaean civilization, while the remaining three can be related to the findings from the Greek island of Lefkada from the Ionian archipelago.