St. Michael’s Church is a Romano-Gothic single-nave church erected at the end of the 13th or at the beginning of the 14th century. It was constructed on the foundations of an early Romanesque church, which came to be mentioned in the Charter of the consecration of St. Tryphon’s Cathedral from 1166. 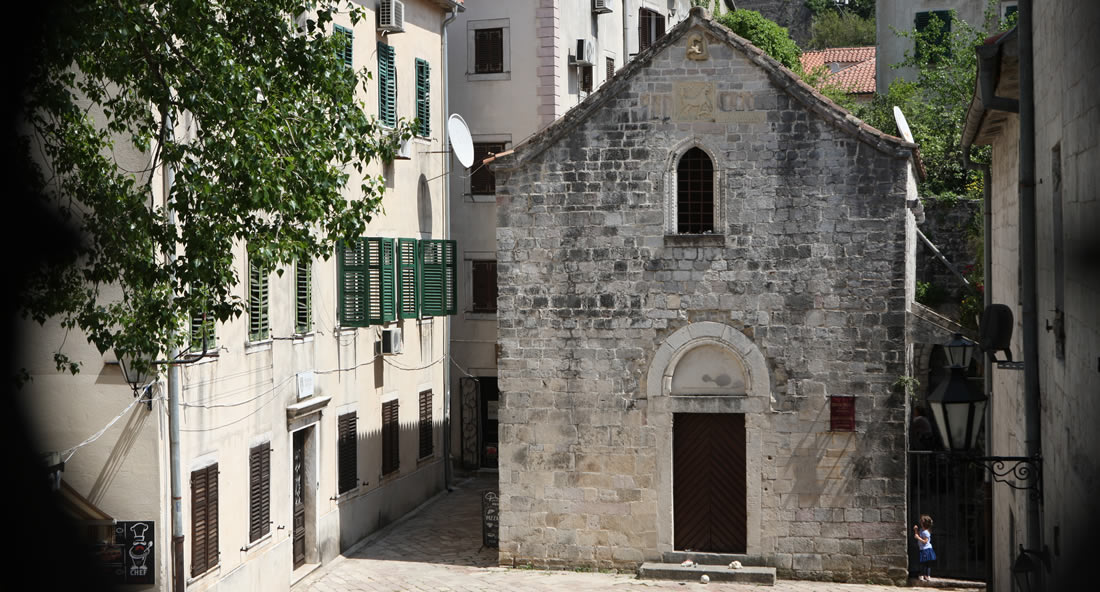 The foundations of the present-day church coincide with the width of the preceding edifice, only it is somewhat shorter in length and deviates by some degrees from the line of direction of the older church. The Church was partly built using the material of the older church, which was also corroborated by the architectural research.

St. Michael’s Church is a single-nave vaulted edifice with the entrance portal on the western and semi-circular apse on the eastern side. In mid-15th century, above the entrance a bell-tower was constructed with a shape of distaff containing two bells. In archival records we can find the information that one of the principal streets of the medieval Town of Kotor once ran alongside the southern façade of the Church.

All these fragments are integral parts of the permanent display of Kotor Lapidarium.

In the apse of the pre-Romanesque Church, which is somewhat larger than the apse of the existing church, up to the height of around 70cm, there are preserved remains of fresco paintings with the representations of lower extremities of different saints.

In the interior of the existing apse, in the very centre, there is a fresco painting presenting Deisis-Christ Pantocrator. Above this, there is the deiction of the Assumption (Assumption of Christ). On the righthand side there is the image of St. Tryphon, patron saint of Kotora, holding a model of the Ton in his hand. On the southern wall of the Church there is a damaged fresco painting with the image of St. George.

The fresco paintings were created in mid-15th century and they are attributed to Lovro Dobričević from Kotor, who had been educated in Venice and who is quite certainly the most important Gothic painter in this part of the Adriatic coast.

At the beginning of the 19th century, French occupying troops turned the Church into a storage area for the needs of the troops. This period saw certain architectural changes, when, amongst other things, new floor was constructed to divide horizontally the former single space; the original windows were closed with new broader ones built; the altar of the Church was also relocated then.

The Church was completely restored and brought back to its original condition by the former Municipal Cultural Heritage Protection Institute, in the period from 1980 to 1989. Ever since 2004, St. Michael’s Church has housed Kotor Lapidarium which is open to public.